Prashanth Varma’s next gets an electrifying title
Published on Mar 23, 2022 4:10 pm IST 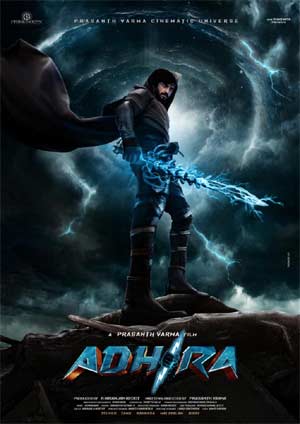 Young and talented director Prasanth Varma’s upcoming movie has been officially announced by the team RRR. To our surprise, successful producer DVV Danayya’s son is making his acting debut with this superhero movie titled Adhira.

The makers have released a video glimpse to announce the movie. The film is from Prasanth Varma Cinematic Universe and it will be unique in terms of scripts and story-telling. Adhira is another superhero film, where Kalyan will be seen in the titular role.

A Series of sequences are shown in the video to exhibit the superpowers of our original superhero. He has had this special skill of generating electric energy since his childhood and he becomes stronger and more valiant, as he grows up.

The visuals are on par with Hollywood standards and the last portions of Kalyan as Adhira generating electrical energy with his specially designed weapon are a feast for eyes. The weapon he is wielding is in backbone shape and it appears like Indra’s powerful weapon Vajrayudha. The first strike alone creates a great impact and raises expectations on the movie.

K Niranjan Reddy will produce the movie on a high budget under Primeshow Entertainment. Gowrihari scores music for the film, while Dasaradhi Shivendra handles the camera. Adhira will start rolling after Prashanth Varma completes all the works related to Hanu-Man.