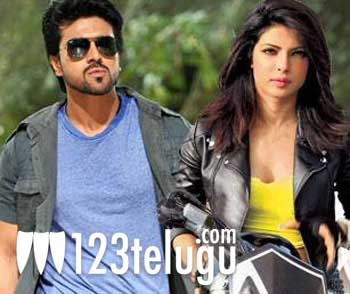 Ram Charan and Priyanka Chopra, who’ll be seen together in the remake of Zanjeer, is going to shoot a promo song for the film. Apoorva Lakhia is directing the film in Hindi and Telugu. Amit Mehra is producing it. In a recent interview, Apoorva Lakhia revealed that he’s planning to shoot a promo song on the two lead actors in January 2013 as a part of the promotional campaign and this song won’t be a remix of any other hit number from the past. Sanjay Dutt is playing a crucial role in the Hindi version, whereas the same role is going to be played by Sonu Sood in the Telugu version. Zanjeer marks the debut of Ram Charan in Bollywood and there’s a lot of anticipation to see how Ram Charan manages to reprise the role of a honest police officer who has to take on injustice since Amitabh Bachchan had originally played this role. Devi Sri Prasad is composing the music. Zanjeer is likely to hit the screens in 2013.