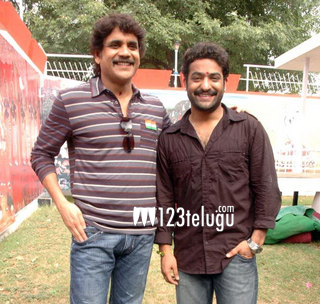 For the past few days, Filmnagar is abuzz with rumours that Nagarjuna is going to team up with NTR for a multi-starrer film and reports also suggested that Vamsi Paidipally is going to direct the film. While this rumours has got movie lovers all excited, since it’s an interesting combination, it looks like we’ll have to wait a little longer before things falls in to place.

As of now, there is no official announcement about the film, although the talks are reportedly going on. The latest rumour is that the film will be launched on April 15; however, we have come to know that it’s false news. There’s still plenty of time left before the production house starts making plans to begin the film’s shooting. For now, the film is still in pre-production phase and we’ll have to wait and see when this project finally takes shape.

Currently, Nagarjuna is busy with the post-production of his upcoming film Manam which is expected to release later this summer. On the other hand, the last schedule of NTR’s Rabhasa is going to start soon.