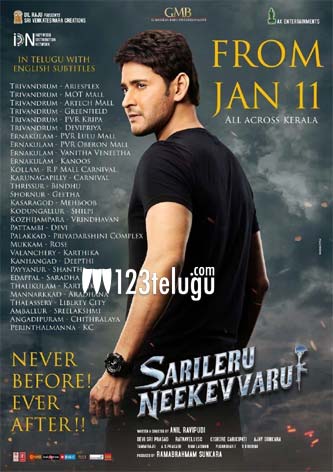 Mahesh Babu’s popularity across Kerala is increasing rapidly. His latest film, Sarileru Neekevvaru, is setting a new record for any straight Telugu film that ever released in Kerala. The film is simultaneously releasing in Kerala on the 11th of January (tomorrow).

Sarileru Neekevvaru will be releasing across 30 centres in Kerala. This is the biggest ever release for any Telugu film in Kerala till date. The film will be playing with English subtitles. Also, in a never before feat, an early morning show at 6:30 am in Kochi will mark the film’s opening in Kerala.