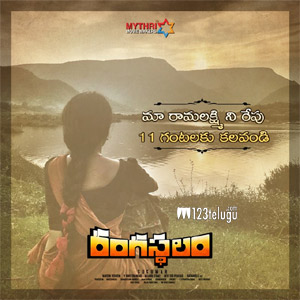 The first look teaser of Ram Charan’s Rangasthalam created a superb hype for the film. Now, the makers have decided to take things a notch higher with yet another look of the film.

This time, the first look of Samantha’s role will be revealed either through a poster or teaser tomorrow morning. Samantha plays the role of a village belle called Rama Lakshmi in the film which is a typical village drama.

Sukumar has etched a beautiful character for Samantha who is pairing with Ram Charan for the very first time. Mytri Movies produce this film which has music by DSP.