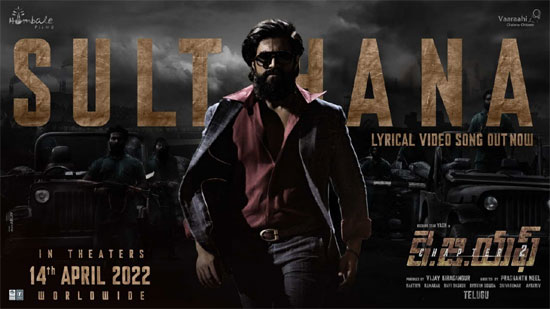 The entire nation is eagerly waiting to witness the swag and rage of Rocky Bhai in KGF: Chapter 2. Starring Yash in the lead role, the period action entertainer is all set to hit screens tomorrow.

Ahead of the release, the makers have released a new song from the movie. Titled Sulthana, the song is an extended version of Dheera Dheera song from KGF: Chapter 1. Composed by Ravi Basrur, the track is a pack of elevations about the lead actor. The powerful vocals of Sri Krishna, Prudhvi Chandra, Arun Kaundinya, Sai Charan, Ravi Basrur and many others become an asset of the song.

Lyrics penned by Ramajogayya Sastry are so powerful. We need to wait to see how the song was used in the main film. Directed by Prashanth Neel, the magnum opus will be released in Kannada, Telugu, Tamil, Malayalam and Hindi.