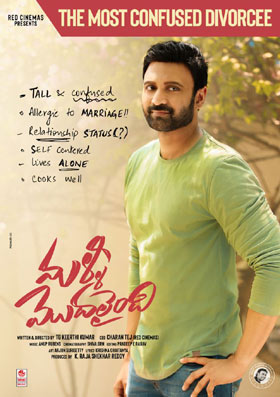 Hero Sumanth’s upcoming romantic drama, Malli Modalaindi, was in news recently when a picture of a wedding card with Sumanth’s name along with a bride’s name went viral on social media. The picture led to speculations that Sumanth was getting remarried. However, Sumanth took to Twitter and clarified that the picture was from his soon-to-release film, Malli Modalaindi.

This morning, Malli Modalaindi team unveiled a special poster revealing Sumanth’s look in the movie. Sumanth looks class and suave in a full sleeved green top and blue jeans. Going by the poster, Sumanth seems to be allergic to marriage. His relationship status is a question mark. He is self-centered, lives alone and cooks well too. The caption at the top reads, “The most confused divorce.”

Malli Modalaindi has Naina Ganguly playing the female lead. The film is being directed by debutant TG Keerthi Kumar and produced by K Raja Shekhar Reddy under Red Cinemas banner. Anup Rubens is the music composer. After wrapping up its entire shoot, the film is gearing up for its theatrical release soon.