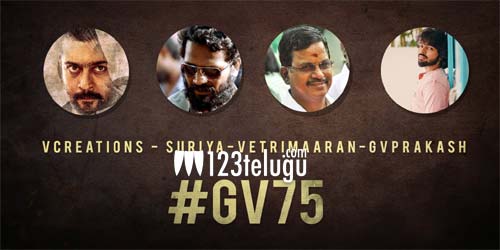 The just announced Suriya’s 40th film will be quite special for young actor-composer GV Prakash Kumar. It marks the multifaceted artist’s 75th film as a composer. Needless to say, GV Prakash is quite excited about the project and his collaboration with Suriya and the film’s director Vetrimaaran.

Incidentally, GV Prakash is also scoring the soundtrack for Suriya’s upcoming film, Aakasham Nee Haddhu Raa (Soorarai Pottru in Tamil). On the other hand, he has also been working with Vetrimaaran from the director’s debut film, Polladhavan, to his recent movie, Asuran, except Vada Chennai. GV75 (or Suriya40) will be bankrolled by noted Tamil producer Kalaipuli S Thanu.