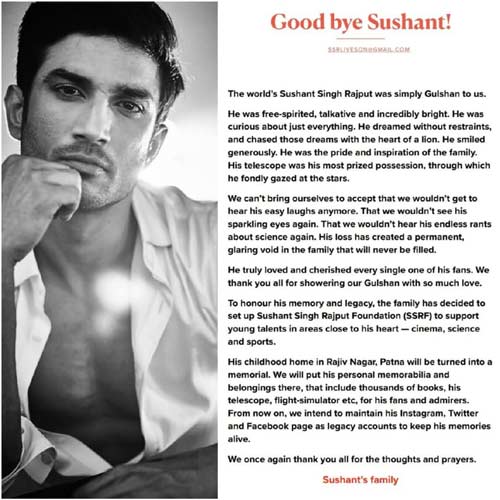 In a touching tribute, the family members of Bollywood star Sushant Singh Rajput have launched Sushant Singh Rajput Foundation (SSRF) to honour his memory and legacy. In a moving note, titled Goodbye Sushant, the actor’s family announced that his childhood home in Rajiv Nagar, Patna will be turned into a memorial.

The SSRF will support young talents in areas close to Sushant’s heart — cinema, science and sports. The actor’s personal memorabilia and his prized possessions, including thousands of books, his telescope, flight-simulator etc will kept for display at the memorial for his fans and admirers. Also, the family will be maintaining Sushant’s Instagram, Twitter and Facebook pages as legacy accounts to keep his memories alive.