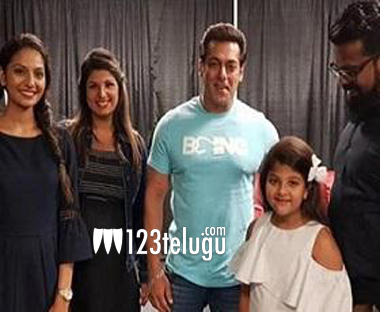 Former heroine Rambha has been staying in North York, Canada, ever since she married Canada-based businessman Indrakumar Pathmanathan in 2010. Last night, Rambha and her family met Bollywood superstar Salman Khan in Toronto, Canada.

It’s well-known that Rambha had acted alongside Salman Khan in the 1997 blockbuster, Judwaa and Bandhan in 1998. Rambha, her husband and both her daughters posed with the star hero and also Katrina Kaif, Sonakshi Sinha, Jacqueline Fernandez and Prabhudeva.

Salman Khan and the other artistes are currently touring across Canada for the Da-Bangg tour.