The story behind NTR breaking down while garlanding Balayya
Published on Oct 10, 2019 7:09 am IST 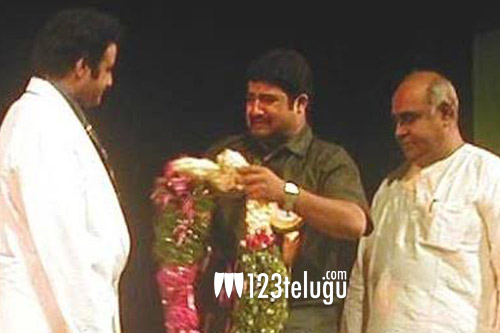 We occasionally come across a photograph where NTR breaks down into tears while garlanding his uncle Balakrishna and another one in which both Balayya and Tarak share one garland on the same stage. In his latest video blog, veteran writer Paruchuri Gopalakrishna revealed the story behind that emotional moment.

Gopalakrishna recollected an incident on the sets of NTR’s Allari Ramudu in Palakollu. During the break, NTR told Gopalakrishna that he worships his uncle Balakrishna like a die-hard fan. When the senior writer asked Tarak if he wanted to talk to Balakrishna, Tarak immediately broke into tears. Gopalakrishna called Balayya and requested him to talk to NTR. Balayya obliged and NTR cried like a baby while talking to his uncle. Gopalakrishna said that it was the first ever moment the Nandamuri uncle-nephew talked to each other.

Later, at the 2001 Cinegoer’s Awards ceremony, the organizers made Tarak garland Balakrishna on the stage. “NTR got very emotional during those moments. That’s how much he loves his uncle,” Gopalakrishna said.