The teaser of Anand Deverakonda’s Highway is gripping
Published on Aug 9, 2022 9:40 pm IST 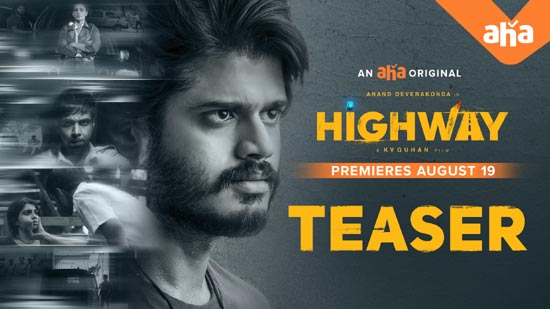 Anand Deverakonda attracted the audience with Middle-Class Melodies that was released on OTT during the pandemic. He is all set to entertain the audience with his upcoming film High Way. The first song Kommallo received a good response

Today the film’s teaser was released by the movie unit. The teaser is gripping. It starts with the love angle between the lead pair who are on a 10-hour journey. Then it suddenly shifts to the mystery angle where 5 murders take place. The lead actors and the psychopath cross their paths on this journey. Looks like there is a presence of a lot of thrilling elements.

Simon K. King composed the music. Cinematographer turned director K.V. Guhan is helming this film that has Manasa Radhakrishnan as the female lead. Venkat Talari is banking this project under the Sree Iswarya Lakshmi Movies banner. The film is presented by Northstar Entertainment banners. It premieres on the streaming platform Aha on 19th August.