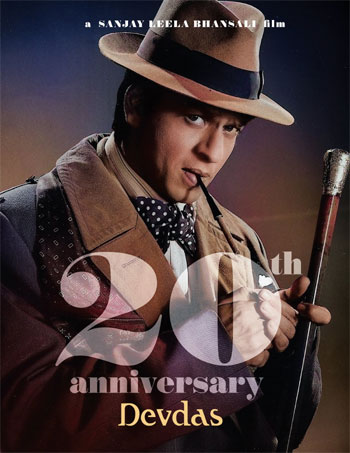 Its been 2 decades since Shahrukh Khan’s iconic film Devdas was released. This timeless classic was directed by Sanjay Leela Bhansali and it had Madhuri Dixit and Aishwarya Rai Bachchan in other key roles. Bharat Shah produced this epic romantic drama.

Marking the occasion of 20 years of the film, Bhansali’s production house took to its social media handles and posted a few unseen pictures of the lead actors. It is based on the novel Devdas written by Sarat Chandra Chattopadhyay.

Devdas was a huge commercial success. The film won five National Awards and eleven Filmfare Awards back then. It got premiered at the 2002 Cannes Film Festival. It was also the Indian Submission for Best International Feature Film at the Academy Awards. The movie also got nominated for the BAFTA Award for Best Film Not in the English Language category. Devdas was the most expensive Indian film at that point in time. Devdas always remains as a special film in the Indian film industry.

Devdas is mystical.
Devdas is melancholic yet poetic.

Devdas is a character and a film so special that it sparks love, longing & romance within us even today… 💕
Devdas, 20 years later still stands for all this and a lot more!
Here’s celebrating #20YearsOfDevdas pic.twitter.com/hp8iG1AoNs