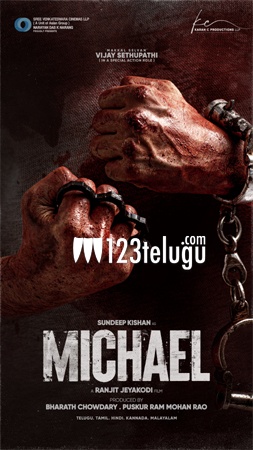 It is known that acclaimed Kollywood star Vijay Sethupathi and Tollywood hero Sundeep Kishan will be sharing screen space in a pan-India action drama. On the occasion of producer Suniel Narang’s birthday, the makers today revealed that the film has been titled as Michael.

In Michael, Sundeep plays the titular role and his character has a lot of intensity. The title reveal poster has Sundeep’s handcuffed, as he holds brass knuckles in another hand. There is blood all over his shirt and hands.

Michael is being directed by Ranjit Jeyakodi and produced by Bharath Chowdary and Puskur Ram Mohan Rao, while Narayan Das K Narang is presenting the film. Michael will be released in Telugu, Tamil, Malayalam, Kannada and Hindi.