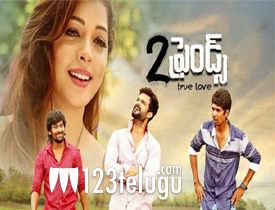 Continuing the trend of low budget movies, a youthful entertainer called ‘2 Friends’ has hit the screens today. Let’s see whether the film has anything interesting in store for us.

Nani(Suraj) and Mitravinda(Para) are two childhood friends who are very close to each other. Nani falls in love with Avanthika(Sonia), who in turn likes Akhil. Heartbroken with this, Nani goes into a depression. Left with no choice, Mitravinda takes things in hand and decides to reunite her friend Nani and Avantika. Well, how does she do all this is the whole story of the film?

The lead actors, Suraj and Para did justice to their roles and are good as close childhood friends. Dhanraj and Snigdha who played buddies of the lead actors evoked decent comedy. The emotions showcased on friendship are okay to an extent.

Certain elements in the first half regarding close friends and how they live life will connect with the youth. Senior comedians, Kota Srinivasa Rao, Jaya Prakash Reddy, and Sri Lakshmi make their presence felt in the film.

One of the biggest drawbacks of the film is the outdated and age-old storyline. We have seen so many movies in this genre and there is nothing new in 2 Friends as well.

There are no basic twists and the conflict point showcased does not elevate the proceedings at all. The comedy track of Sadhu irritates you to another level and you will look at the exit doors whenever this episode appears on the screen.

There was a good scope for romance in the film but the director did not utilize that opportunity at all. Lack of known faces in the film is another drawback as the required performances were not up to the mark.

Camerawork by Surender Reddy was good as the film looks pretty neat on screen even though it was made with a very low budget. Editing by Marthand K Venkatesh is perfect. Production values of the film are decent but the music by Ghatikachalam was horrible as none of the songs impressed. Coming to the director Srinivas, he has chosen an ordinary story and narrated it in a lackluster manner.

On the whole, 2 Friends is an old-school story of love and friendship. Disappointing execution, lack of known faces and freshness in the narration take the film down in no time. Films like these have come many a time in the past and you need not rush to watch this movie as there is nothing new you will see here. Avoid it.