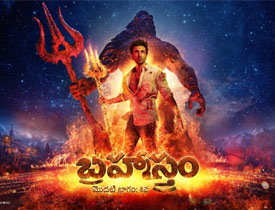 Brahmastra has been in the making for the last seven years or so. The film starring Ranbir and Alia has hit the screens in multiple languages today. Let’s see whether it lives up to the hype or not.

Shiva(Ranbir Kapoor) is a DJ who has a cosmic connection with fire. He keeps getting dreams about an Astra which a dreaded gang is after. On the other hand, Junoon(Mouni Roy) is the one who is looking for a part of an anklet which combined with other two parts can end the world. This Astraverse also have a connection with Shiva’s life? What is the backstory? Who is Shiva? How does he save the world? and where do Alia Bhatt, Nagarjuna, and Amitabh Bachchan feature in this set up? To know the answers, watch the film on the big screens.

The amalgamation of the different Astras and making it into a story looks quite interesting. The core concept by Ayan Mukherjee is good and is set in an interesting backdrop. The makers have spent a lot of money and that shows on screen.

Ranbir Kapoor is the main stay and he as the one with special powers breathes life into his role. Ranbir was superb in the climax of the film. Alia Bhatt gives him ample support throughout the film and their chemistry looks cool.

Nagarjuna has a small but an important role and he does well. He gets a key scene during the interval point and holds the screen well. Mouni Roy gets the meatiest part and is superb as the main villain. She makes use of this big opportunity and handles big stars as opposition.

When compared to the first half, the second half is handled well by Ayan Mukherjee. The climax has good thrills and the VFX done is also decent. Last but not the least, it was good to see Shahrukh Khan in a cameo.

The major disturbance in the film is the way the VFX has been overdone. There are so many VFX scenes which look similar and bore you after a while. The VFX done in the first half looks tacky.

More focus is given to Alia and Ranbir’s romance which lacks any impact and bores the audience. The director takes forever to enter into the main story. Also, his explanation about the Astraverse is also not clear. It takes time for the normal audience to understand what the film is really all about.

The film is quite lengthy and needs to be edited right away. Also, the action blocks don’t look real after a while. Too much graphics and flying in the air spoil the fun for the audience.

As so much is packed about the Astras and their universe in the second half, the audience gets a feeling of things being overdone. The screenplay is yet another letdown as it does not hold your attention throughout. Amitabh Bachchan’s role is not that effective to the narrative.

A lot of money has been spent on this film and that shows in the visuals. Music by Pritam is pretty good but the BGM by Simon is loud as hell. The VFX done works only in parts. The camera department is handled by different people and there are scenes which look outdated as the film has been in the making for a long time now. Production design is not that great and so was the editing.

Coming to the director Ayan Mukherjee, he has only made slice of life films so far and this project is quite ambitious for him. His story idea and the thought of creating an Indian Astraverse is good on paper. But when it comes to execution, he misses the bus. There is no emotional depth in the film and this is where things fall flat.

As Ayan has gone all out on the VFX part, his screenplay becomes bland and he narrates the film in a haphazard manner. When the film talks about Astras and their universe it looks good. But the romance, action part and utilisation of characters is not proper making this film a bumpy ride.

On the whole, Brahmastra is a passable action drama that has an interesting backdrop. The valuation of Astras and their universe looks interesting but the narration is haphazard. The love story is dull and the VFX is overdone. However, the film has moments of intrigue for the audience due to its storyline and grandeur making it a passable watch this weekend. As the film has Rajamouli’s name associated with it, the film will find takers in Telugu but the rest depends on word of mouth.