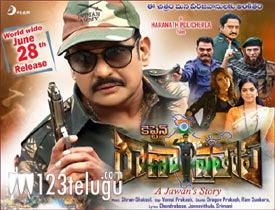 After a brief gap, actor Haranath Policherla is back with a film titled, Captain Rana Pratap. Touted as a patriotic film, this film has hit the screens today. Let’s see how it is.

Rana Pratap(Haranath Policherla) is a sincere Army officer who goes to Pakistan to crack an undercover operation set up by Pak and China. But to his bad luck, he gets caught by the Pak Army and is sentenced to the death penalty. This is also the time when Pratap overhears a deadly attack which is being planned by Pak to destroy the city of Hyderabad in India. Rest of the story is how Rana Prathap escapes from Pak’s custody and saves Hyderabad from a major bomb attack.

Haranath Policherla tried to fit into the shoes of an Army major’s role quite well. For the first time in his career, Haranath did not dub for his role and this was a good move from him.

The serial actress who portrayed Rana Prathap’s wife is good in her given emotional role. A few flashback emotional scenes between Rana Pratap’s family are executed in a decent manner. A girl who acted as Chandini provides eye candy treat in the first half with her glamour show.

Though the film storyline looks decent, Haranath spoiled it completely by executing the proceedings in the worst possible manner. The screenplay and narration totally run on a dull note with over the top elevations for the hero which was unnecessary.

Especially, the pre-climax scenes where Haranath escapes from Pakistan and reaches India border looks like a joke and is executed in the worst manner.

Senior actor Sayaji Shinde is totally wasted as all his combination scenes with the hero in Pakistan jail will irritate the audience to core.

Haranath’s idea of making a film on Indian Jawan’s looks decent but his narration lacks depth in it. Editing work is below par as the run time could have been trimmed to at least half an hour. Cinematography work is adequate. VFX and Graphics work is totally pathetic.

The best part of the film is the background score which is good. Two emotional songs are good. Production values for this low budget film are decent.

On the whole, Captain Rana Prathap is a silly and badly made patriotic film which fails to impress the audience in every department. Haranath’s lackluster narration and boring proceedings will test the patience of the audience. All we suggest is to safely skip the film this weekend and look for better options this weekend.