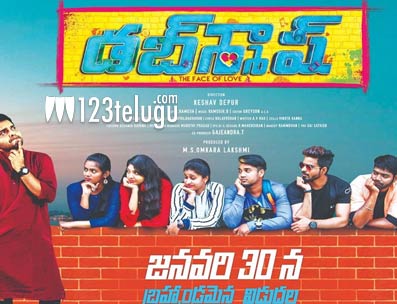 Directed by Keshav Depur, a small film titled, Dubsmash has hit the screens today. Let’s check how it is.

Dubsmash stars Shervin (Pavan Krishna) and Meghana (Supraja) coincidentally join the same college and become good friends in no time. Eventually, love blooms between them and when they are about to propose each other, Meghana gets kidnapped by a gang. Why did the gang kidnap Meghana? Is there any serious problem behind Meghana’s kidnapping? How will Shervin trace the gang and rescue his lover? That forms the rest of the story.

A few fun episodes and two songs in the first half are executed in a decent manner. Hero Pavan Krishna’s performance in a few crucial scenes is impressive. Especially, his emotional acting in the interval episode and the climax portion is very good.

Looks-wise, heroine Supraja is cute and impresses with her glamour show in a few songs and romantic scenes. Acting-wise too, she is okay. The major highlight of the film is nonother than Getup Seenu of Jabardasth fame. His comedy punches and dialogues evoke good fun. Other artists, who are seen as hero’s friends’ are okay to an extent.

Though the film has a few passable moments in the first half, lack of gripping screenplay and interesting narration are big minus points for the film. Apart from this, the film also has no proper flow as most of the scenes end abruptly.

The suspense elements that revolve around Getup Seenu’s character have not been presented in an impactful manner. The second half of the film has many unwanted and dragged scenes that will irritate the audience to the core. The Dubsmash concept used during the climax portion is not at all convincing and looks over the top.

Director Keshav Depur’s thought of making a feature film on the Dubsmash concept is decent but he should have worked more on the narration part as it the biggest defect for the film. He focused more on songs and writing a few comedy scenes and completely neglected the execution part. Music by Vamsiih B is decent as two songs composed by him are good. Cinematography by Ramesh R is okay. Editing work is nice. Production values for this low budget film are adequate.

On the whole, Dubsmash is a disappointing outing and has nothing going it’s way. Though a few fun scenes featuring Getup Sreenu are good, lack of gripping narration and depth in the storyline makes it a tedious watch this weekend. Ignore it safely.