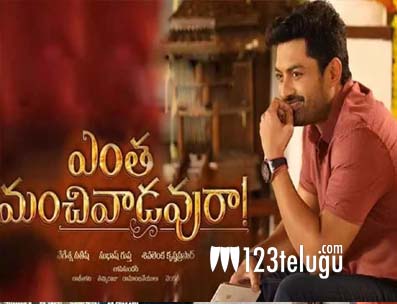 The last release of this season, Entha Manchivadavura has hit the screens today. Let’s see whether this film lives up to the hype or not.

Balu(Kalyan Ram) loses his parents at a very young age and all his relatives leave him alone in life. Upset with this, he starts an emotion supplier business with his friend(Mehreen). The concept of their company is to send people as close relatives and remove all the problems in their lives. In one case, Balu goes as a son to Tanikella Bharani’s house and gets into deep trouble featuring a sand mafia kingpin(Rajeev Kanakala). The rest of the story is as to how Balu solves all his problems and keeps his life going.

Suhasini and Sharath Babu do their roles well and their episode has good emotion and comedy. The fun generated by Vennela Kishore during this time is very good. He single-handedly carries the second half and brings out good fun though the proceedings deviate from the central point.

Tanikella Bharani is neat in his emotional role. The first half has neat emotions and the story is established nicely. Rajeev Kanakala is very good as the main villain but sadly, he did not get good screen time in the second half. Comedy by Naresh is just about okay.

The film has some good scenes and then it is followed by routine drama which keeps bringing the tempo time and again. The story has scope to portray good emotions but the director Satish did not make use of it and the emotions during the last 20 minutes look very forced.

Instead of sticking to the core point, the makers bring in a comedy angle and though it is good, it loses the grip on the film. Also, the romance angle between the lead pair is dull and some good scenes could have made things interesting.

The production values are decent but the camerawork of the film is just about ok. The dialogues are very good and the production design is neat. The screenplay goes for a toss as there is no grip in the proceedings as the scenes come in one after the other with no effect. Music by Gopi Sundar is superb as all the songs have been shot quite well. Editing is okay and so was the art direction.

Coming to the director Satish Vegensa, he has adapted the Gujarati film well and set it up nicely in the Telugu nativity. He also starts the film well and brings an intriguing factor as to what is happening in the emotion supplier business. But in the second half, he loses the plot and falls for the commercial plot and degrades the film.

On the whole, Entha Manchivadauraa is an emotional drama with a good point and some decent family moments. It is the second half which goes for a toss as the proceedings get sidetrack. Kalyan Ram’s role, Vennela Kishore’s comedy are the basic assets and keeps the audience engaged at regular intervals. But the slow pace and routine narration spoil the mood. Not that the film is bad but there are not many exciting moments in the film which makes it just a passable and routine watch this Sankranthi.