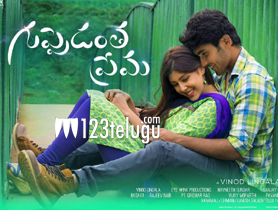 Vinod Lingala’s directorial debut, Guppedantha Prema, featuring newbies Sai Ronak, Aditi Singh and Aishwarya released all over today. The film promises to showcase the memorable feelings of first love. Let’s see if it manages to live up to its promise.

Yuvan (Sai Ronak) is an university student who looses his parents in an accident. He always dreams of a love marriage because his parents also had one. Yuvan befriends Sandy (Aditi Singh) and soon their friendship blossoms into love.

Twist in the tale arisis when the young couple gets separated. A heartbroken Yuvan pens a book titled Tholi Prema as an ode to Sandy. After reading the book, a girl named Swara (Aishwarya) falls in love with Yuvan.

Destiny has other plans as Sandy comes back into Yuvan’s life. Rest of the story is as to whom Yuvan chooses and ends up with finally.

Even though most love stories have almost the same premise, the beautiful and touching emotions in love are still inspiring filmmakers to come up with different love stories. Guppedantha Prema too has its moments of an intense love feeling in the first 30 minutes of the second half.

With Swara’s entry, the second half flows smoothly without any boredom, thanks to the comedy factor. Coming to the actors, Sai Ronak did a fine job by ably portraying his role throughout the film. Aditi Singh has good screen presence and her performance in most scenes is commendable. Aishwarya impresses with her lively act.

The major minus point of Guppedantha Prema is the lack lustre love story in the first half. Lack of innocence makes the first half only a beautifully shot montage. The Yuvan-Sandy love track lacks the required emotional depth in the second half.

A song comes out of nowhere in the second half and affects the film’s narrative. Even the scenes between Sandy and Swara lack the fizz. Even though the dialogues are impressive, they appear to be a mismatch with the characterisations of the lead cast. Climax is pale and the audience will come out disappointed. The film’s story has several loopholes and logic goes for a complete toss in several scenes.

Sanjay Loknath’s impressive cinematography stands out from the rest of the technical departments. Music director Navneeth Sundar gave a couple of decent songs. Editing is okay and visual effects are pretty ordinary.

Writer-director Vinod Lingala tries to weave an emotional love story in his debut but falters at times. He shows his command in writing only after the first 20 minutes post the interval.

Every Friday, filmmakers come up with different love stories hoping that they’ll manage to impress the audience. Released with a promise to showcase the innocence and beautiful emotions of first love, Guppedantha Prema, even though had a decent premise falters due to its uneven execution. Despite an interesting first 20 minutes in the second half, the film lacks an emotionally engaging narrative and makes the audiences crave for more.