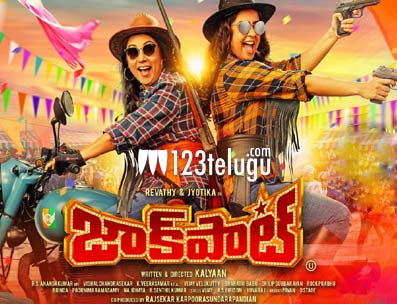 Continuing the trend of Tamil dubbed films, a movie named Jackpot has hit the screens today. Let’s see how it is.

Akshaya (Jyothika) and Maha (Revathi) are two conwomen, who often rob people on different occasions. After a point, they come to know about a magical vessel that has special powers. They get obsessed about it and plan to steal it any cost from Masthan’s(Anandraj) house. Will they be successful in their robbery? and what is the magical vessel all about. To know the answers, watch the film on a big screen.

The concept of the film is decent enough and has an old school charm. Certain comedy scenes featuring Jyothika and Revati have been executed well in the film. Jyothika is the heart of the film. Her aggressive body language, dialogue modulation was top-notch in the film.

Revathi is a charmer in the film. She will be seen in a completely new avatar in this film and did a good job. The chemistry between these senior actors was terrific to see on screen. Motta Rajendran evoked a few laughs in his innocent role. Anand Raj as the comedy villain was also good. Yogi Babu is another attraction with his comical antics.

Except for some good comedy, the rest of the proceedings are routine. The narration is jaded in many areas and has nothing new to offer. As the concept is interesting, the screenplay was also supposed to be gripping but that was not the case in the film.

The scenes are not that interesting in several areas and this bores the audience in many places. There was no need to showcase Jyothika in so many fights which looks a bit over the top and silly. There is no serious motive in the film as many commercial elements have been added just for the sake of it.

Production values of the film are decent enough and so was the camera work which showcases the mass effects well. So many silly fights and over the top comedy could have been easily chopped off. The Telugu dubbing done is pretty good. Dialogues are neat and so was the music and BGM. Coming to the director Kalyan, he chose a decent subject but did not make use of it well. He focused more on comedy and mass scenes making the film boring in many areas.

On the whole, Jackpot is a fantasy drama that falls flat with its narration. Except for a few laughs, the director missed out on a good subject and made the film commercial to please the masses. In this process, the narration goes for a toss and makes the film a pretty boring watch this weekend.