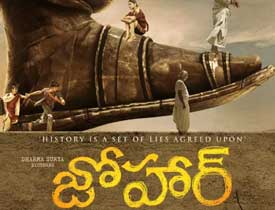 Johaar is a film that has been promoted a lot in the last few days. The film has finally hit the small screens today and is available on AHA. Let’s now see how it is.

The film has five different stories. A young CM(Krishna Chaitanya) wants to build a massive statue in memory of his late dad to gain public sympathy. On the other hand a young athlete(Naina Ganguly), a poor farmer(Eeswari Rao), a young girl(Esther), and an old man(Subhalekha Sudhakar) who runs an orphanage get effected into this whole story badly. How their lives get affected in such a political move forms the rest of the story.

One of the biggest plus points of the film is its emotions. They are set in the right place as the emotional angle works well till the end of the film. The four stories are nicely linked into the main story and the casting is spot on. The social message showcased in the film is very good.

Firstly, Chaitanya Krishna gets a meaty role and is superb as the shrewd and cunning politician. He performs well and brings a lot of depth to the proceedings. Veteran actor Subhalekha Sudhakar and Eswari Rao do justice to their roles and fill the screen with their emotional performances. New heroine, Esther is also neat in her role.

The surprise package was Naina Ganguly. The actress who is always seen in glamorous roles makes a U-Turn and does her athlete’s role perfectly. Be it her body language, dialogue delivery, and performance, Naina has done a very good job. The production values of the film are top-notch as the film is aided by superb camerawork. The locations chosen are authentic and the framework set by director is on point.

After a very good first half, things become a bit slow. Though the emotions are on point, the pace drops a bit and scenes become quite predictable for the audience. The film is a direct attack on various governments as to how politicians in power neglect the common man’s needs. This angle might not go well for a section of the audience.

As the director takes good time to establish the stories, in the beginning, he does not have much time to bring in the impact of the so-called major twists in the film. They are a bit rushed in the setup.

Credit should go to the director Teja Marni as his casting is amazing. He extracts solid performances from his cast as not one actor hams or looks forced. He is a good talent and has a grip on emotions and shot-making which is pretty impressive. The songs nicely fit into the narrative and the dialogues are quite meaningful.

The production design of the film is amazing and the film has a very sober and soothing effect on the audience because of the camerawork and BGM. The director’s idea of showcasing his message of how the government should help the public and not themselves has nicely been set into the narrative.

On the whole, Johaar is an emotional drama that has a superb premise. It is a direct satire on various political parties as to how they ignore public welfare and think of only their personal agendas. This concept has nicely been set through various stories in the film. Barring the slow pace and a bit predictable second half, this film ends as a decent watch for its good message and solid performances.