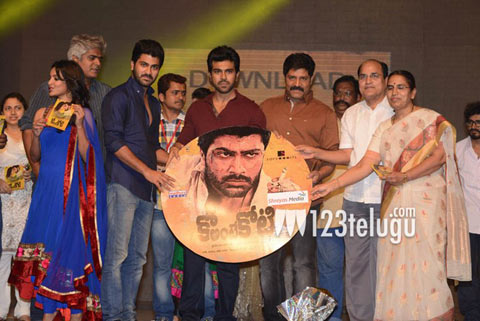 Sharwanand has made a name for himself as a promising talent with a good taste for story selection. He is all set to hit the screens soon with ‘Ko Antey Koti’. The movie is being produced on Sharwa Arts banner and Anish Kuruvilla of ‘Avakay Biryani’ fame is the director. Music has been scored by Shaktikanth Karthick. The audio release took place recently, so let us check out the album of this movie.

This is a solid opening number which should technically fall into the heavy metal genre. However, there are sounds from Indian instruments as well. The song takes some time to grow on you but once it does, you will be hooked. In the background, you can hear Sr.NTR’s famous ‘Inspector Ranjith Kumar’ dialogue from ‘Kondaveeti Simham’ and S.V.Ranga Rao’s iconic ‘Dongre’ dialogue from ‘Jagath Jetteelu’. Suraj Jagan has done a good job with the vocals. It will be interesting to see how this song will be shot in the film. A bit of caution though – lyrics and the language may be offensive for some

A slow, romantic solo number that has been rendered beautifully by Naresh Iyer, ‘O Madhurimave’ makes a very good impression instantly. Sreshta’s lyrics are poetic and the soundtrack complements the mood beautifully. The song is about the hero’s longing for his lady love. Good use of the guitar and percussion instruments gives the music a soothing quality. Thumbs up for this lovely song.

This is a romantic duet and vocals have been taken care of by Haricharan and Priya Hemesh. As the title suggests, this song is going to be shot in the rain and Vasistha Sharma’s lyrics are appropriate for the setting. The soundtrack for this number is interesting. It is a fusion of slow melodious notes and heavy metal sounds of the electric guitar. A decent number and  Priya Hemesh’s lovely voice adds to the song’s appeal.

‘Bangaru Konda’ is a short 3:15 seconds number that has been rendered beautifully in a classical fashion by Harini. Sreshta’s lyrics are poetic and have a devotional quality about them. Karthick’s music is perfect for the setting and a good use of traditional Indian instruments can be felt in the music. Once again, this song has a very soothing quality about it.

A romantic duet that starts off with good guitar work, ‘Aagipo’ has good performances from Karthik and Shwetha Mohan. Music is melodious, with a good use of traditional instruments. Vasistha Sharma’s lyrics are pretty good – basically,the lovers want time to slow down for them. Like some of the numbers in this album, this song will take some time to grow on you. A nice and melodious song overall.

This number that starts off interestingly with the radio chatter of Miami police. Fans of heavy metal music will just love this song but for others, it will end up as a decent number. I loved the throbbing heartbeat that keeps cropping up through the number. BRK’s lyrics are hard hitting and in keeping with the theme of the song. It will be interesting to see how this song will be slotted in the movie. Shakti Karthik has done a decent job with the lyrics.

‘Ko antey Koti’ has a refreshingly new audio album that will strike a chord with students and young adults. There are soft and melodious numbers in this album along with two heavy metal tracks. ‘Ko antey Koti’, ‘O Madhurimave’ , ‘Aagipo’ and ‘Bangaru Konda’ are my picks from this album. Music director Shaktikanth Karthik makes a very good impression with his music for this album. The songs are legally available for free on www.koanteykoti.com , so go grab them.