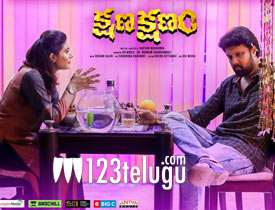 Young hero Uday Shankar and Arjun Reddy girl Jia Sharma’s new film, Kshana Kshanam, released today. Veteran producer Allu Aravind has released the movie through his distribution wing ‘Geetha Films’ and it made everyone curious about this small film. Let’s see how the film turns out.

The story is set in Vizag. Satya (Uday Shankar) is an orphan. He marries another orphan named Preethi (Jia Sharma) and leads a pretty ordinary life. Preethi is a money-minded woman and she is not happy with Sathya living off her earnings. They even contemplate divorcing each other.

Sathya loses heavily in fishing business. As a result, his loans pile up and he is desperately in search of a way out. In the process, he joins a dating app and befriends a married woman named Maya (Shruti Singh). She seduces him and invites him to her home to spend some quality time on a fateful night.

Upon his arrival, Sathya finds Maya dead. He immediately informs the police, but to his shock, S.I. Krishna Manohar (Ravi Prakash) suspects him and starts the investigation. Will Sathya be jailed or will he come out of the case? Will his marriage survive or end in divorce? These questions will be answered on the big screen.

Hero Uday Shankar does a decent job as a desperate man. His performance in the scenes that showcase his helplessness after being caught in an unexpected murder case is good. It’s good to see Arjun Reddy girl Jia Sharma in a full-fledged role after a long time. She is okay in her girl next door avatar. Her character gains significance in the second half.

The climax twist is the main talking point of the movie. Rest of the actors, including Ravi Prakash and Raghu Kunche, are good in their limited roles. Veteran music composer Koti makes his acting debut with this film in a lawyer’s role. He has a decent screen presence.

While the plot is ordinary, the lackluster narration spoils the experience to a great extent. The first half runs on an slow pace, as too much of time has been catered to establish the hero’s unsuccesful personal and professional lives. Songs act more like speed brakers. The twist involving the lead actors half-way through the second half is silly.

The narration is quite underwhelming and often tests your patience. While the camera work is adequate, the editor should have been blunt and edit out a few unnecessary scenes in the first half. The dialogues are mostly functional and don’t make much impact. While the songs are average, the background score is okay. The film is shot on a minimal budget and it can be seen on the big screen.

On the whole, Kshana Kshanam is a disappointing thriller that fails to engage the audience. Barring the climax twist, the rest of the film falls flat due to insipid story-telling. You may watch the movie to encourage the young team, but keep your expectations low.