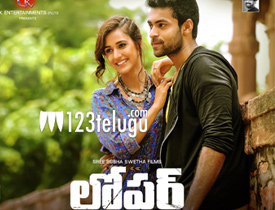 Maverick director Puri Jagan, took the responsibility of showcasing mega hero Varun Tej in a complete mass avatar. The result is Loafer which has hit the screens today. Let’s see whether Varun manages to showcase his all round skills or not.

The story of the film is quite simple. An arrogant and irresponsible father(Posani Krishna Murali) separates from his wife(Revathi) and brings his son Raja(Varu Tej) away from her .

Raja grows up to become a Loafer like his dad and believes that he is a motherless child. As time passes by, Raja falls in love with Mouni(Disha Patani) who is facing a huge threat from her father(Mukesh Rishi). Raja then decides to free Mouni and right when is about to do so, he comes to know that his mom is still alive and is directly related to Mouni and her problems.

Loafer will surely be a turning point in Varun’s career. It rightly proves that Varun can do an out and out mass role and impress everyone in songs and fights. The lanky hero will definitely be a huge star in the coming days and has been showcased in a superb way. Varun’s stature, screen presence and emotional performance has been tapped excellently by Puri.

Yet another major asset of the film is Posani Krishna Murali. The seasoned actor has done his role supremely well and evokes superb laughs as a shrewd father. It is a tailor made role for him and Posani’s chemistry with Varun Tej is quite good. Disha Patani makes a confident debut and looks good on screen.

First half and interval bang are quite good and move at a swift pace. All the emotional scenes between Revathi and Varun have come out extremely well. Being a seasoned actress she is, Revathi was brilliant in her performance during the second half.

Story wise, once again there is nothing new. After the interval, the film gets quite predictable and you exactly know what will happen by the end. After the post interval part, the film drifts apart and some unnecessary scenes come in to the picture.

Climax also looks a bit forced and is also dragged out with too much melodrama. Certain logics go missing in the film as the mother son relation could have been revealed during pre-climax to make the film even more believable.

Music of the film is a huge let down as the songs do not register at all. Brahmanandam’s entry and his episode have been unnecessary added and looks logicless.

Production values are quite good. The Jodhpur visuals look fresh and have been shot in a grand scale. Varun Tej has been styled in a superb way and looks apt for his character. Dialogues by Puri are good and so was the editing. Screenplay is pretty good and holds for most part of the first half.

However, after a point in the second half, Puri looses out on ideas and introduces some unnecessary characters. But credit should go to him completely for showcasing Varun in a superb way and extracting wonderful performance from the young star.

Overall, Loafer is a film which will do wonders for Varun Tej’s confidence and career. The lanky hero steals the show in a mass avatar and impresses big time. But a predictable story line, hurried up climax and below average music spoil the mood of the film. Finally, do not expect anything out of the box and only give this film a shot for a typical Puri narration, mother sentiment and Varun’s all round performance.