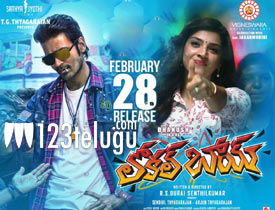 Tamil hero Dhanush’s Sankranthi release, Pattas has been dubbed in Telugu as Local Boys. The film has hit the screens today. Let’s see how it is.

Shakti (Dhanush), a small thief messes up with Neelakantham (Naveen Chandra) a kick-boxing institute owner in a robbery issue. On the other hand, Kanyakumari (Sneha), who gets released from jail after sixteen years targets Neelakantham and plans to kill him. Who is Neelakantham? Why has Kanyakumari targeted him? Is there any backstory behind her revenge? How Shakti fits into the entire plotline. That forms the rest of the story.

The importance of the ancient form of martial arts named Adimurai is showcased nicely. As usual, Dhanush impresses with his performance in the role that has two variations. He is lively as a youth in Shakti’s role and his comedy timing and dances in the first song are enjoyable.

Dhanush’s makeover as Vijayandra Bhupati is the crucial flashback episode that is good and delivers an emotional performance in the village head role. Actress Sneha gets a meaty role and impresses with her good performance in the given purposeful role. Her acting in emotional scenes in both present and flashback times brings depth to the proceedings.

Our Telugu actor Naveen Chandra is going places for sure as he is continuously picking good roles and one of them is the character he did in Local Boys. He is impressive in the negative shaded character and showcased good variations in the role he portrayed. Heroine Mehreen, Nazir are okay in their roles. The guy, who acted as Shakti’s friend evokes hilarious fun at times.

One of the major minus points of the film is that it has a predictable storyline. Adding to it, the screenplay also lacks freshness as it and runs on a routine template with no twits and turns.

Kanyakumari finding her son Shakti and their entire meeting episode look more like a cinematic setup. The climax portion is a bit rushed up as things work in favor of Shakti in the national level boxing championship one after the other. This looks over the top.

Director R. S. Durai Senthilkumar’s intention to showcase the existence of ancient martial art form Adimurai is good but the way he presented the film has nothing new in it. He should have focused on writing a better screenplay by keeping Adimurai as the basic theme. Editing work by Prakash Mabbu is dull and so is the case with cinematography by Om Prakash. Music by Vivek-Mervin is good as three songs are good. Production values by Sathya Jyothi Films are rich.

On the whole, Local Boys is a film that impresses only in a few areas. Dhanush, Sneha’s acting and the core theme of the film are good but the predictable narration may not get universal acceptance. Considering the mass content, the film may find a few takers in B and C centers.