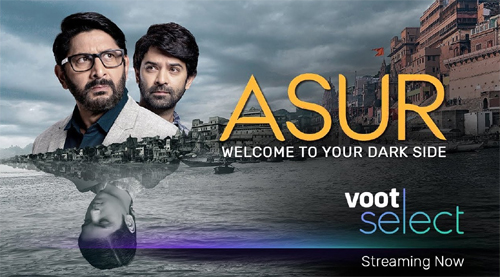 So, continuing the series of reviewing movies and shows during the lockdown period, our today’s pick is the Hindi web series Asur on Voot. Let’s now see how it is.

The eight-episode series has a solid premise of crime, mythology, and suspense. Arshad Warsi, who is always known to do fun roles showcases what an actor he is when it comes to doing a serious role. He does his character in a solid manner. Barun Sobti is also cool in his key role as a cop with a troubled back. The crime angle and how it is connected to the ancient times of mythology has been brought in superbly. There is no dull moment in this show as suspense keeps building with each episode. The drama and gruesome killings look authentic and make up a thrilling scenario to watch.

For all those who have watched the famous Hindi shows CID, Crime Patrol, this series looks a bit inspired. Ridhi Dogra’s key performance in this web series falls short and could have been stronger. The series is an adult-only watch and not for the regular audience.

Overall, Asur is a Hindi web series that has been narrated on a solid note. The premise, performances, and the whole production values are quite intriguing and leave you excited. Barring the slightly stretched episodes in the 5th and 6th, this web series has good twists and makes for an engaging watch during this lockdown.