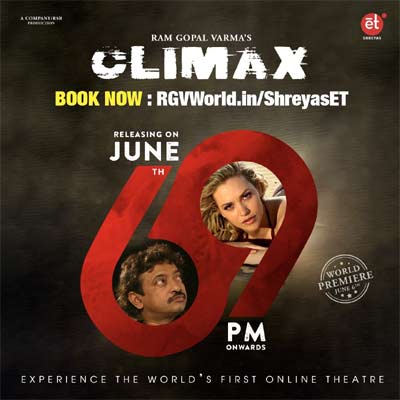 So, continuing the series of reviewing movies and shows during the lockdown period, our today’s pick is RGV’s new English film Climax. Let’s now see how it is.

The film is about a couple, who, on a fun trip, end up in a desert which has a board written: “Do not Enter”. But still, they enter the desert and start chilling around. All of a sudden, they start facing crazy problems. Left with no choice, they escape from the desert and reach a local police station to complain about things. But their problems become even bigger there. Who are these people? Why are they troubling the couple? and how do they escape from there is the whole story of the film?

As expected, RGV uses his talent to showcase Mia Malkova in the best sensuous way possible. The film starts on an interesting note and the whole set up looks good in the beginning scenes of the film. Like in all RGV films, the camera work is top-notch in this movie as well. The way all the romantic and thrilling scenes have been shot looks good. Mia Malkova did her best to act and looked okay.

It is hard to pen all the bad things about this film as they are so many. Even though the film is 52 minutes long, it feels like you are watching this film forever. The biggest headache in the film is the sound effects which irritate you till the end.

Even though RGV showcases Mia Malkova well, there are certain scenes that go overboard as the angles in which she is showcased look cheap. There are so many things that happen just for the sake of it. Some weird people on motorbikes barging into the scene without any purpose lack clarity and frustrate you big time.

There are basically no twists in this thriller and a small point is stretched for no reason till the end. The screenplay goes for a toss as the so -called horror scenes do not create any impact making the proceedings go haywire.

Overall, Climax is yet another dud from RGV. There is nothing special or interesting that the film showcases. The horror thriller is narrated in a haphazard manner with none of the scenes making any impact. All those who are excited to see Mia Malkova, there is nothing great to boast about her in the film. Barring the good camera work, this film ends as a big bore and should be ignored during this lockdown period.