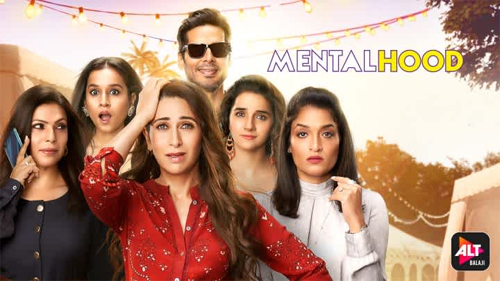 So, continuing the series of reviewing movies and shows during the lockdown period, our today’s pick is the Hindi web series Mentalhood featuring Karishma Kapoor on Alt Balaji. Let’s now see how it is.

Meira Sharma(Karishma Kapoor) is an ex-Miss Kanpur and now a mother of three. She lands in Mumbai to start life afresh with her husband(Sanjay Suri) away from her nagging mother in law. Meira also starts a blog where she describes her life with three kids and always a busy husband. Apart from this, Karishma also has to deal with similar moms like her played by Sandhya Mridul, Shiklpal Shukla, Amrita Puri, and Tolotamma Shome. The whole web series is how these supermoms with their own problems get through their crucial phases of life.

The show is mainly based on moms and how they take care of their kids and family irrespective of crazy problems. The show is filled with issues of how today’s modern women deal with different aspects of life and raise their children. Karishma Kapoor makes a comeback and is so good to see on screen once again. She has done a superb job as the frustrated, humble and patient mom.

Other actors like Shilpa Shukla, Sandhya Mridul do well in their respective roles. All the problems in the initial parts of the episodes have been established well. Dino Morea as the single has also done his job perfectly. The whole set up and the theme is quite relatable to all especially women.

The series glorifies even the smallest problems in the biggest way possible which is not needed at all. What is a daily chore for some middle-class working moms is showcased as a big deal in the series which looks over the top? The editing of the show is pretty bad as scenes keep jumping from one to another without any purpose. The BGM and camerawork are below par. The so-called big issues that they face with their teenage kids have not been resolved well. The drama is not that gripping in the latter parts of the show.

Overall, Mentalhood is a lady-oriented web series that has a relatable premise of parenting. The performances are pretty good and the initial 4 episodes are quite interesting. But the horrible technical aspects, uneven and abrupt ending spoil the mood. It’s a kind of series that is bad or that good also. So, give this series a shot only if you have nothing else to do during this lockdown.