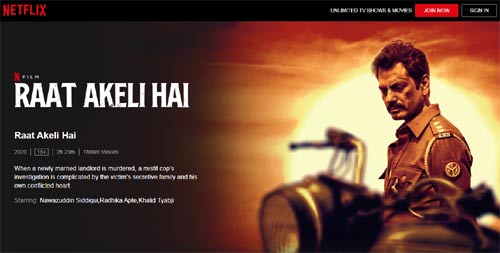 Edited by : A. Sreekar Prasad

Jatil Yadav (Nawazuddin Siddiqui), an unfeigned policeman faces life-threatening challenges after he starts investigating the puzzling murder of a wealthy high-profile landlord. Unfazed by the torments of a gang of goons, Jatil starts digging deep and he is handed with the responsibility of saving Radha(Radhika Apte). Can Jatil crack the case which is heavily influenced by the family members of the victim and also local politics? Can he save Radha? Watch the film to know the answers.

The film principally, banks on the performances of the lead cast Nawazuddin Siddiqui and Radhika Apte. Both the versatile actors do justice to their roles. Nawazuddin Siddiqui is good in the role of a sincere police officer and his subtle expressions are superb. He holds the film with his solid screen presence.

Radhika Apte is seen in the role of a physically abused lady and she carries it well. Shweta Tripathi and Shivani Raghuvanshi get brief roles and they perform to the best of their capabilities. Aditya Srivastava as the local MLA looks menacing.

The film gets off to a good start as two people are murdered and their bodies are excavated in an interesting manner. The story deals with the physical abuse of women which is very much relevant now. The twist in the climax is apt and gives the story a rightful conclusion.

Raat Akheli Hai is a whodunnit that runs at its own pace which might not keep all sections of the audience engaged. Slow-paced narration is not something one would associate with a suspense drama and the Honey Trehan directorial falls under this category. There are quite a few scenes that do not sustain the desired amount of emotions or suspense.

Barring the twist in the climax, a large portion of the film has predictable sequences. This takes a toll on the excitement factor. The emotional connection is not up to the mark and looks monotonous at times. Debut director Honey Trehan picks a story on the lines of Hollywood film ‘Knives Out’ and gives it his own spin. He should have focused more on the screenplay as a few scenes look repetitive.

Overall, Raat Akheli Hai is a murder mystery that runs at its own pace and is based on an underlying issue in society. The backdrop, performances of Radhika Apte, and Nawazuddin Siddique are top-notch. The film does not cater to all sections of the audience, but all those who like a whodunnit that unfolds in an unhurried manner can give the movie a shot.