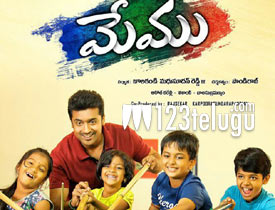 The Suriya production, Pasanga 2 has finally been dubbed into Telugu as Memu. Directed by Pandiraj, this film has Suriya and Amala Paul in cameos and has hit the screens today. Let’s see how it is.

Navin and Naina are two hyper-active kids who become a huge burden to their respective parents because of their aggressive behaviours. Left with no choice, their parents join them in a boarding school.

Same situation continues there too as both the kids create huge problems and run away from the hostel. This is the time their parents are forced to meet a child psychiatrist(Suriya) who in turn decides to treat them.

Rest of the story as to how Suriya and his wife(Amala Paul) takes things in their hand and bring a huge change in the lives of these kids.

Concept of the film is quite good as it deals with the common problem that kids face now a days in the society. Even the solution that has been showcased in quite impressive. Suriya is very good as the psychiatrist and holds the screen for most of the time. Credit should go to him for supporting such important concept.

The way he deals with the problems and explains things through his doctor’s role has been showcased well. Both the kids who did the main roles have done wonderfully well.

The various problems that parents encounter with their kids in day to day life has been elevated well. Bindu Madhavi plays her role of a confused mom to the best of her capabilities.

Even though the concept chosen and solution showcased is decent, the narration is where the film takes a slight beating. The entire first half has been used up just to showcase the problems that the kids create in daily life.

Too much time has been taken to showcase these problems and just the last fifteen minutes were rushed to solve the entire issue. Pace of the film is very slow and certain scenes during the second half are very hard to sit through.

Narration is also slow as major scenes lack novelty. The film has traces of Aamir’s Taare Zameen Par and many aspects have been utilised from that film. Length of the film is also way too long as a simple issue could have been narrated in crisp way without the disturbance of the songs.

Production values of the film are quite good. The way the education system has been showcased and how things should be in reality looks quite novel. Music of the film is below average and at least two songs could have been chopped off to make matters better. Screenplay is disappointing as major part of the film gets repetitive.

Coming to the director Pandiraj, he has done a decent job by choosing a crucial point and showing what problems do today’s urban kids and parents face. Had he made the film a bit crisp, the effect could have been even better.

Not very often do films like Memu come out these days. The film has a burning problem which every parent faces these days. The film will especially appeal to those who are going through such situations with their kids. If you ignore the predictable story line and slow pace of the film, you can connect to the emotions easily. But for the regular audience who seek basic entertainment, Memu is not the film you would you like opt this weekend.