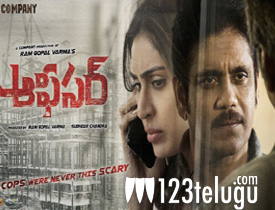 After a long gap, RGV and Nagarjuna are back with a serious cop drama called Officer. The film has hit the screens today and let’s see how the film turns out to be.

Sivaji Rao(Nagarjuna) is a Hyderabad based officer who is posted in Mumbai to handle the case of a corrupted cop called Pansari. Sivaji successfully manages to arrest Pansari but the latter uses all his influence and comes out of the jail and joins back in his duty. This time, he becomes even more lethal and starts targeting Sivaji. Rest of the story is as to how Sivaji handles all his problems and once again proves that Pansari is actually a criminal in the disguise of a cop.

Nagarjuna looks super fit and handsome in his role of a cop. After a long gap, you get to see him in an aggressive role and the star actor does well and anchors the film completely. All his scenes with his daughter are nicely executed. The film starts off with a promising note as the first ten minutes are gripping.

The first half has some good moments featuring the Mumbai police setup as RGV has managed to get a decent look for the film. Certain investigation scenes look interesting and have been conceived well in the first half.

One of the biggest drawbacks of the film is the main villain. RGV should have chosen a better or a known actor to make things interesting. Not even in one scene does the villain create any impact on the audience and is in no way fit to face Nag in many scenes.

After starting the film on a gripping note, RGV’s narration goes for a toss during the second half. The manner in which the main villain joins his duty, makes Nag a part of his team and the various turns of events are not that interesting. The basic drama which is a highlight of all RGV films is missing in this film.

The climax is stretched to no extent by showcasing the fist fight between the hero and villain. The supporting cast is very weak and do not create any depth to the proceedings. RGV’s narration lacks focus as an interesting script gets wayward and the impact is lost in the transit.

Even though the film is made on a small budget, the production values are good. Thankfully, RGV has not played way too much with the camera angles as the cinematography looks neat. The entire production design, Mumbai cop set up, and locations look realistic. Editing is decent and so were the dialogues.

Coming to the director RGV, he has done a half-hearted job with the film. Probably, you can say that RGV would have made this same story in a very gripping manner ten years back. RGV, who generally gets his casting spot on has faulted in Officer. The selection of the villain and his performance are the biggest drawbacks and do not create any impact.

On the whole, Officer is a good script gone wrong kind of a film. RGV’s story idea is interesting but his narration is not that exciting. Weak villain, not so engaging hero-villain moments and lack of drama hamper the flow of the film. This is not a disaster kind of a film from RGV but the proceedings are not that exciting too. Except for Nag’s sincere performance, this film has nothing new to offer. All those who want to see Nag in an aggressive avatar after a long time can give this film a shot but the rest can look for something else more promising.