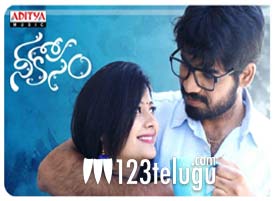 Starring all newcomers, a romantic drama called Nee Kosam has hit the screens today. Let’s see if it has anything in store for us.

Kautilya(Aravind Reddy) and Karthika(Subhangi Panth) are a couple who are in deep love. But Kautilya is the kind of a guy who expects his lover to be with him all the time and do nothing else. Because of this, he keeps getting into fights with Karthika and breaks up one fine day. As time passes by, Kautilya gets badly injured in a bomb blast and is admitted into a hospital. There, he chances upon a diary which has the beautiful love story of Ajith and Siya. Reading this, he understands the true value of love and decides to get back with Karthika. What is this book all about? Who are this Ajith and Siya?. To know this, you have to watch the film on the big screen.

Hero Aravind Reddy is decent in his role and does well in his given character of a possessed lover. Yet another hero, Ajith also does in his limited role. He was good in all the emotional scenes in the film. His dialogue delivery was perfect. Subhangi Panth, the female lead was okay as the female lead.

Comedian Sudarshan and Sai did well in their comic roles and evoked decent humor. The concept of the film looks good and is ably supported by some good dialogues in the film. The love story has a spark during the beginning of the film and holds the proceedings well.

The manner in which two parallel love stories are thought off looks good on paper but has not been executed well on screen. The film goes back and front in time and this has not been established well by the makers which is the biggest drawback and confuses the audience.

The camerawork of the film was quite bad and does not elevate the parallel love stories well and this is a bit confusing for the audience. Music was good but the BGM was disappointing as mentioned above. One song, Vellipomake has been shot well Dialogues by Shiva K have bee written well and elevate some dull scenes nicely. The basic concept looks good. Coming to the director Avinash, he has done just an okay job with the film. He has not utilized the strength to the best of his capabilities and this takes the film down in no time.

On the whole, Nee Kosam is a romantic drama which showcases two parallel love stories. The basic point is good and certain emotions click well. But a confusing screenplay, disappointing narration, dull supporting cast and poor technical aspects take down the film in no time and make it a tedious watch this weekend.