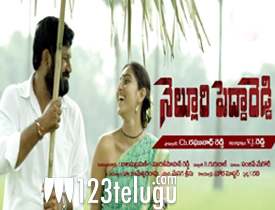 Nellore Pedda Reddy is carrying a decent buzz, thanks to an entertaining trailer. The film has released today and let’s check whether the movie lives up to the expectations or not.

The president of a village, Nellore Pedda Reddy(Sathish Reddy) is known for helping people around him. In this process, he builds a very good image for himself. The antagonist, Kukkuteswar(Prabhas Sreenu) develops hatred as he can’t bear the success Pedda Reddy achieves. In a bid to dethrone him, Kukkuteswar plots various mischievous plans. On the other hand, Pedda Reddy falls in love with Kamakshi(Mouryani). Rest of the story is as to how Pedda Reddy fights Kukkuteswar and also wins his love.

Mouryani comes up with an entertaining performance and stands as the main asset of the film. The hero’s characterization impresses to an extent. The way the story unfolds and the troubles faced by the hero have been written and showcased well.

The conversations between Pedda Reddy and his wife offer some depth to the movie. The sacrifices made by the hero and the circumstances he faces to win his love look partly engaging.

The movie lacks a solid story. Most of the scenes have been simply stuffed with no real intent. Director VJ Surya tests the patience of the audience by adding a hero elevation scene every now and then.

Badly written comedy further adds to the list of miseries and can get on the nerves of the viewers. The beaten to death storyline fails to offer anything new and tampers the run of the movie. The casting department did a bad job as most of the actors fail to add any real intensity.

Music director, Gururaj comes up with a below-par performance. The movie has been made on a shoestring budget and that is clearly visible on the screen. Editing has been left in the air as many scenes seem to be repetitive. The music is another let down for the movie. The director did a bad job by picking a routine script. His uninteresting narration and ill-paced screenplay take a toll on the output of the movie.

On the whole, Nellore Pedda Reddy is yet another routine family drama which has nothing new to the offer. Except for some depth in hero’s character, the boring narration and slow-paced screenplay deviate the attention of the audience completely and ends up as a tedious watch this weekend.