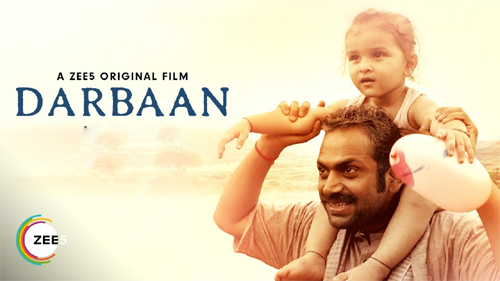 So, continuing the series of reviewing OTT shows and films, our today’s pick is the Hindi film Darbaan. The film is available on Zee 5 and let’s see how it is.

The film starts off in the late 1960s by showcasing Raicharan, the most trusted servant of the mining tycoon Naresn Tripathi(Harsh Chayya) in Dhanbad being so close to Ankul(Sharad Kelkar), who is Tripathi’s son. But in the ’70s, the mining is taken over by the government, and the Tripathi’s are left bankrupt and leave the city. Years later, Ankul, who grows up to become this family man comes back to Raicharan and asks him to take care of his family once again. Raicharan happily agrees but a crazy event lands Ankul’s son in problems. What is that problem and how did it create a rift between Ankul and Raicharan is the story.

Sharib Hashmi, who is becoming quite popular these days gets the central role and he excels in it. He has two phases to showcases in his age and the actor emotes quite well in the old age part. His emotional outbursts were lovely to see on screen.

Sharad Kelkar is also neat in his supporting role and adds weight to the film. The narration is soothing and simple in spite of the film being predictable. The flawless camera work and editing elevate the film well.

The BGM and the production design was good. Rasika Duggal, as always is amazing in this film as well. The way story is established in a detailed manner looks good on screen. The bygone era has been showcased so well.

The story is quite old and has been narrated in many old films already. The setting is new and novelty wise, one should not expect anything here. Also, the climax looks a bit forced and could have been better. Too much time is taken to enter into the main conflict point in the second half and this is where the narration has no time to establish the issues of the protagonist well.

On the whole, Darbaan is a film that has a very old and predictable plot and is adapted from Khokababur Pratyabartan, a short story by Rabindranath Tagore. Though it takes its own sweet time to grow on you, the performances are the ones that will hold you together in this emotional drama.