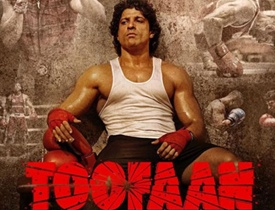 Continuing the trend of reviews and shows on OTT, we are ready with the latest Hindi film Toofaan. The film is out on Amazon Prime and let’s see how it is.

Aziz Ali(Farhan Akhtar) is a small-time gangster in the Dongri area of Mumbai. He gets attracted to boxing through his friend and decides to become one. But in order to get into the world of boxing, he needs the blessings of his coach Prabhu(Paresh Rawal) who has hatred towards Muslims. The rest of the story is as to how Aziz Ali convinces Prabhu to coach him and what all problems does he face in his big boxing journey.

Farhan Akhtar is known to give solid performances and does the same in this film as well. The way he trains for his role is solid. Look wise, he has got things right and in all the emotional scenes, Farhan does so well.

Mrunal Thakur is amazing as Farhan’s love interest. She plays a calming factor in the film and is good. The aesthetics of the boxing backdrop are showcased well and Farhan’s training looks good even though it is dragged.

But the star of the film is Paresh Rawal who plays Prabhu the coach. He is terrific and gives a lot of depth to the film. More than the boxing fights, his conversation with Farhan in various scenes is superb and Paresh Rawal is the mainstay of the film.

Toofaan is a film that has a similar premise from the first scene itself. In a way, you can say that such stories have been showcased on Indian screens multiple times. There is nothing new that Toofaan shows and the sports drama does not grow on you.

Only the setting is different but the struggle that the boxer goes through is routine. The scenes also look repetitive that you know what will exactly happen in the scenes to come. The film is a rehash of Sultan in many scenes and does not have a novelty factor whatsoever.

The emotional angle is real and you feel for the characters but as the outcome is known, the effect is not good at all. Also, the length of the film is way too long for a sports drama. The film takes a lot of time to enter the main story.

Production values of the film are top-notch and the interiors of Mumbai have been showcased so well by the pat camera work. The music is dull but the BGM is pretty good. Dialogues written for the Mumbai lingo are good. Coming to the director Rakesh Mehra, he puts his heart into this film but he does not create any impact on the outcome as his narration is so predictable.

On the whole, Toofaan is a boxing drama that has a predictable premise and routine boxing scenes. Farhan Akhtar worked so hard on his body and performance and is the mainstay of the film. The emotions are good but the story is so old and mundane that you don’t get any kick out of it and ends as a dull watch this weekend.