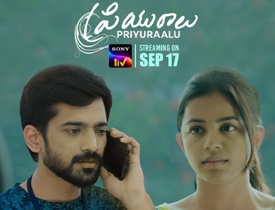 Continuing the trend of reviewing shows and films on OTT, today, a film called Priyuraalu is out on Sony Liv. Let’s see how it is.

Madhav(Prudhvi Medavaram) works in a news channel and chances upon a girl named Divya(Mounika)in his apartment. They let loose and even have a physical relationship. Things change when Madhav reveals to Divya that he is already married. A similar case happens in the same apartment as the watchman Kaushik Reddy has a relationship with Sarita(Kamakshi). It also sees crazy ups and downs and the rest of the story is as to how these parallel stories are ended.

Even though all the actors are new, they have performed to the best of their capabilities. The harsh realities of city life and how the youth handle relationships are also showcased well in the film.

The climax is realistic and is handled well by the director. A few emotions in key scenes also impress. The comedy that is generated through the news channel looks funny. The BGM of the film is decent.

The first half of the film has nothing but love-making scenes. Though they look good, after a point, they irritate the audience. More than love-making, the makers should have developed the emotional bond between the couples.

The logic for a toss in most parts as things happen quite easily. As there are not many dramatic moments, things look forced.

Sunil Kashyap’s BGM is good. The camerawork is pretty decent and so were the production values of the film. Coming to the director Ramaraju, his take on modern relationships is good and he also ends the film well. But he concentrated more on love-making scenes than true emotions and this is where the film falters.

On the whole, Priyuraalu is a bold romantic drama that suits the OTT standards. The film is filled with love-making scenes and has less drama. Barring the climax and a few realistic scenes, this film has no proper emotions and ends as a dull watch this weekend.