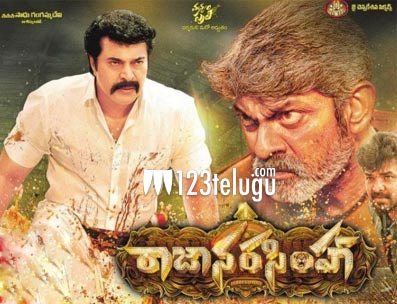 Raja Narashima (Mammootty), a well-respected village head from Palakollu lands in Kochi to bail out his elder brother Chinna Raja Narasimha (Jai), who was cornered in a wrong murder case. In the process, Raja comes across VR Girishyam (Jagapathi Babu) an illegal liquor merchant. Who is Raja Narasimha and what is his backstory? What circumstances lead him to confront Girishyam? How will Raja Narashima deal with the further proceedings? That forms the rest of the story.

Undoubtedly, Mammootty is the major attraction of the film. He impresses yet again with his electrifying screen presence and portrayed the given role with his jovial comic timing which brings instant smiles to the viewers.
Hero Jai did justice to his short and sweet role which is the main USP of the film. His chemistry with the heroine Mahima Nambiar is adorable on the screen.

Looks-wise, Mahima is cute and was fine with her acting skills in emotional scenes. As usual, Jagapathi Babu was fabulous as a baddie and delivers good performance. All his confrontational scenes with Mammootty have been executed nicely. Actresses Anusree and Poorna are apt in their purposeful roles. Other artists, who did key roles in the film are also okay with their part.

Though the second half of the film is a bit racy when compared to the first half, inserting a political sub-plot looks forced. Director Vysakh’s idea of making a commercial entertainer by picking a social element as the core point is nice but he would have narrated the first half of the film in an interesting manner. His screenplay also losses the grip during the course in time.

One of the major drawbacks of the film is that it has a predictable narration. After the first fifteen minutes of JB’s character establishment, things fall flat until Mammootty’s entry which happens only after forty-five minutes.

Editing work by Mahesh Narayanan and Sunil S Pillai is okay. Cinematography by Shaji Kumar is good and apt to the film’s genre. Music by Gopi Sunder is okay but his background score for Mammootty’s elevation scenes is good. Production values for this dubbing film are decent. The Telugu dubbing done is good but the production design was very good.

On the whole, Raja Narasimha is a pucca commercial entertainer that impresses only in a few scenes. Mammootty’s acting and his emotional thread with Jai are good but lack of freshness in the story, dull narration, and boring scenes make this film a disappointing watch this weekend. Stay away from this one.