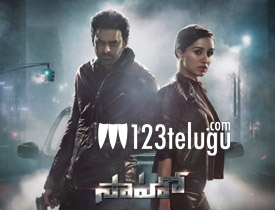 Saaho is one of the most awaited films in recent times. Post Baahubali, this is the only film that has created such a buzz in the media and general audience. Produced by UV Creations and directed by Sujeeth, this film was released in over 9000 screens worldwide. Let’s now see whether the film lives up to all the hype or not.

The film is set in the backdrop of Waaji city which is ruled by Roy(Jackie Shroff). This does not go well with other members of the mafia and they try to eliminate Roy. During the same time, huge money is robbed from Devaraj(Chunkey Pandey) who runs the opposite gang. The cops employ an undercover cop Ashok(Prabhas) to crack this case. Who is this thief who is robbing Devaraj and his gang? What role does Ashok play in this setup?. To know this, you have to watch the film on the big screen.

What surprises you with Saaho is the sheer scale of the film. The makers have gone all out and every penny spent is showcased wonderfully on-screen. The grandeur in fights, songs and action sequences, it is a first of its kind for Telugu cinema itself.

Prabhas does not disappoint his fans post-Baahubali. Be it his macho screen presence or the manner in which he carries the film on his shoulders, Prabhas is pretty good and is a feast for the fans.

Shraddha Kapoor makes an impressive Tollywood debut with Saaho. She is beautiful, shares superb chemistry with Prabhas and at the same time, does her action part quite convincingly.

Star Bollywood actors like Jackie Shroff, Neil Nithin Mukesh play their roles in a very stylish manner. They give the film a complete edge and make it suave. Chunkey Pandey as the main villain is pretty good and does well.

Murali Sharma is neat in his role of a cop and so was Vennela Kishore. The pre-climax action sequence which is shot in Dubai is an edge of the seat ride. The songs have been shot lavishly.

Prabhas does his part well but his makeup, hairstyle, and costumes in many areas is not up to the mark as the star hero looks lazy and dull in a few scenes. The first half is so boring and all the expectations created on the film come down crashing.

The story is quite predictable and is a rip off from several recent Indian films. It has just been given a stylish touch. The film needs trimming of over 10 minutes to make things better.

One of the main drawbacks is the screenplay which is confusing and not up to the mark. The normal audience can get very confused as to what is happening in the film as so many things happen in quick succession.

The manner in which Prabhas and his cop set up are induced in the story lacks basic sense and logic. Sujeeth has surely not utilized the full potential of Prabhas in a proper manner.

Production values of the film are superb. UV Creations have shed their blood and soul to make this film rich, and it does in every which way. Right from the setup to the lavish visuals, everything looks good. Madhie has shot the action part well. The fights, in particular, have been elevated superbly and give the audience a grand sight. Dialogues are pretty good.

Ghibran takes the film a notch higher with his BGM. The music composed by different musicians is also good. Special mention to the production design as the full credit should go to Sabu Cyril for giving the mafia set up a stylish and suave look. Lyrics in all the songs are just about okay.

Coming to the director Sujeeth, he has surely lost out on a big opportunity given by Prabhas. His script is good on paper but his execution is below par. He could not utilize the stardom of Prabhas well and shows him in a very dull manner in key scenes. There are many areas where he could have elevated important scenes but Sujeeth failed to do that and spoilt the first half. He makes it up in the last half an hour as the manner in which he has designed the action is good. But rest of his work is not up to the mark.

On the whole, Saaho surely does not live up to all the expectations and hype laid upon it. Prabhas leads from the front and the action part is very good. But all this only comes in the last half an hour. Rest of the film has an improper screenplay and confuses the audience. Sujeeth’s inexperience takes the film down in many areas. The real test for the film will start once the long weekend is over. Fans of Prabhas will like the film but all those who are watching this film need to lower your expectations completely as Saaho does not have the adrenaline pumping moments which the makers and promos boasted off.