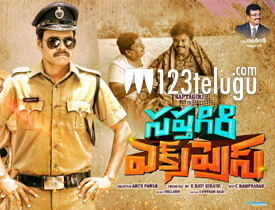 Comedian Sapthagiri, who came to limelight with Prema Katha Chitram is trying his luck as a hero with Sapthagiri Express. Directed by Arun Pawar, this movie has released today.Let’s see how is it

Sapthagiri(Sapthagiri), the son of head constable Shiva prasad(Dr.Shiva prasad) aims to become an actor. But his father wishes to see him an IAS officer. Due to some unexpected turn of events, Sapthagiri becomes a police constable.

What incidents forced him to become a constable? What happens to his dream of becoming an actor? What problems did he face as a cop? That forms the rest of the story.

Sapthagiri impress in his role to an extent. His dialogues in Parashurama and Duryodhana gets up are quite good. Shakala Shankar’s situational comedy is one of the major highlights of this movie and entertains for most of the time during the second half.

Some comedy scenes during the second half are handled quite well by director Arun Pawan. Dr. Shiva Prasad impresses with his acting as hero’s father. Posani and Sayaji Shinde do a decent job in their roles. Some scenes that showcase the tragic lives of police constables have been showcased well.

The film takes a lot of time to get into the actual story. Because of this, the entire first half feels like a huge drag. Heroine Roshni has nothing to do in the movie and appears only for the songs. Also, the love track between the lead pair is very boring.

Some scenes featuring Sapthagiri and his friends irritate the audience big time. There is no seriousness in the proceedings as the major negative characters are quite dull. The way hero takes his revenge and the manner in which these scenes are showcased are quite over the top.

Senior actors like Dr.Shiva prasad, Posani and Sayaji Shinde are given very limited screen space to perform. Even the songs that come during regular intervals put you off at once.

Camerawork by Ram Prasad is not up to the mark. Editing by Gautham Raju is disappointing as many scenes during the first half could have been easily chopped off. Music by Bulganin is decent and production values are also very good for a limited budget movie. Screenplay by Sapthagiri has many loose ends and does not elevate the film much.

Coming to the director Arun Pawan, he failed in executing this remake as the proceedings for most of the time are quite boring. Except for showcasing Shankar’s comedy in the second half, this film does not have much going its way.

On the whole, Saptagiri Express is surely not the start that Sapatagiri would have expected as a hero. The audience who expect some huge doses of comedy from him will be disappointed a bit as the film is not serious in its approach. If you are okay with the over the top comedy and do not bother about the story line, Shakalaka Shankar’s comedy will entertain you to an extent in Saptagiri Express.