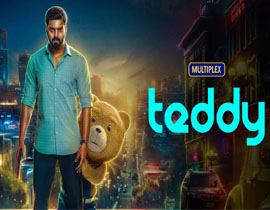 Tamil ( Telugu dub) film Teddy stars real-life couple Arya and Sayyesha in the lead roles. The film raked up curiosity with its impressive trailer. The film is available for streaming on Disney Hotstar. Here is our review of the film.

Sri (Sayyesha) meets with an accident and is shifted to a hospital. The medical team attending Sri gives her powerful sedatives and she slips into medically infused coma. Incidentally, her soul leaves her body and possesses a teddy bear which moves around like a living creature. The teddy then approaches Shiva (Arya) and tells him her story and asks to help her out. Does Shiva help Sri? If yes, then how? What is the story behind all this?

Arya and Sayyesha who are married in real life play lead roles in the film and that builds some excitement. However, Sayyesha makes a very brief appearance, as the majority of the story revolves around Arya and the teddy bear. Arya fits the role very well. His serious demeanour and matured performance power the film. Sayyesha is good in her brief role.

The film has a good premise as a story like this has been rarely explored in Indian Cinema and particularly in South Indian Cinema. The basic plotline is fresh and interesting.

While fresh and exciting stories like these look good on paper, they demand exceptional filmmaking skills if they are to shape up well on the screen. Sadly, Teddy neither has a good screenplay nor does it have any emotional connect. Many scenes look silly, owing to poor writing and way too convenient narrative.

There is one particular scene in the film where the male lead threatens one of the goons to cut open his nerve which is connected to his brain and then transfer the date from his brain to a computer. Such is the kind of silliness infused into this script.

Director Shakti Soundar Rajan picks an interesting subject which has a good premise, but his execution is of very poor quality. Believability is an essential requirement for films like Teddy and this drama/animation is lacking in this department. Most of the scenes are illogical.

Editing should have been better. Background music is impressive and the opening song is good to hear. Cinematography is impressive. Animation works are of top-tier quality and the way in which the teddy bear is shown as a living creature is to be appreciated.

Teddy has a good plot which, if executed well, would have made for an interesting watch. But Shakti Soundar Rajan’s lethargic screenplay and light-hearted approach act against the cause. Arya delivers a fine performance, but it is just not enough to keep the viewers engaged all the way through.