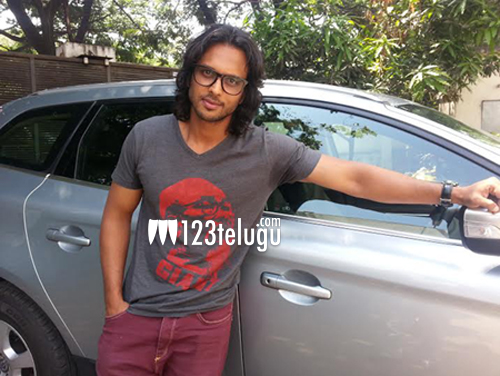 Shekhar Kammula’s Happy Days gave a lease of life to many upcoming artists. One among them is the handsome Aadarsh Balakrishna. You have often seen him in negative roles, and will next see him in Ram Charan’s Govindudu Andari Vadele. We caught up with this talented actor for an exclusive interview, and spoke to him about his role, future plans and his interest in cricket. Here is the transcript.

Firstly, how did you bag GAV ?

I have known hero Srikanth very closely from the Celebrity Cricket League. When I came to know that he is doing a crucial role in GAV, I inquired whether there was something for me as well. Srikanth suggested my name to Krishna Vamsi, who later decided that I should do this negative role opposite Ram Charan.

Tell us something about your role ?

I play a rich spoilt brat who is arrogant and thinks that he is the superior guy in the village. Rao Ramesh and Kota garu are other villains who play my dad and grandfather respectively.

How was it working with Krishna Vamsi ?

Oh ! It was like going back to school once again. I learnt so much during the making from Vamsi garu. Even though I had no shoot, he always asked me to observe how the other actors were performing. He is a tough task master, and is very difficult to get a compliment from him.

Tell us about your equation with Ram Charan ?

I have known Charan back from the CCL days, and incidentally we both went to the same school. All my scenes with Ram Charan have come out extremely well. He is the guy who makes my life harder in the film, and has done a wonderful job in his role.

You have worked with the likes of Nagesh Kukunor, RGV, Shekhar Kammula and now Krishna Vamsi. How was the whole experience ?

I had a wonderful experience working with every one. Each of them belongs to a different school of films, and I have learnt something or the other from them.

What are your expectations from this flick ?

I have huge expectations from this film. Right form the banner to the stars, every thing is so big, and I hope that this film will be a turning point in my career.

Are you not worried about being slotted in negative roles in the future ?

I never think that way. For me, if the audience are loving me in these roles, I would rather be a master in doing these negative roles. It should become a USP for my career.

Going back, how did you enter movies ?

I always wanted to become a cricketer and was trained to be one. That was the time when Nagesh Kukunoor was looking for a boy who had real cricketing skills for his film Iqbal. I got selected, and played the part. Same was the case for Happy days. I went in to audition with a friend and got selected for the role.

You seem to be the main hold of the Telugu warriors cricket team. How do you feel ?

Cricket has given me everything, and it is the reason for my career in films now. I feel extremely blessed to be a part and a key member of the team. I am living my dream through cricket and have no complaints about it.

What are your upcoming projects ?

Finally sum up GAV for us ?

GAV is a complete family film which will entertain you right till the end.

With that we ended our conversation with Aadarsh and wished him the best of luck for his future.