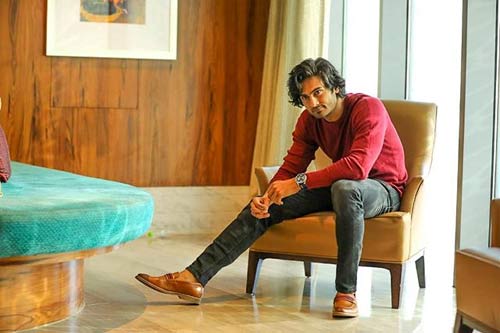 Sudheer Babu is playing a solid role in the upcoming multi-starrer V. The film is up for a release on the 5th of September on Amazon Prime and on this occasion, we caught up with him for a detailed interview. Here is the transcript.

What is V all about?

V is an action entertainer about two strong characters of Rakshasudu and Rakshakudu and I play the Rakshakudu. Both the characters are right in their own way and can go to any length for their missions.

Your response when Indraganti narrated the role?

Indraganti Garu came to me with the role of Rakshasudu and I liked it immensely. It is not the kind of role that I have done in my career. I very well know that he would show me in the best way possible and also, this was a perfect multi-starrer and I said yes to it right away. Also, if given a choice, I would have always chosen the cop’s role in V.

Your preparation for the role?

Indraganti Garu wanted me to look like Brad Pitt from Fight Club. He wanted a leaner body that is not visible once I wear a uniform. I did a lot of training. Working on stunts was difficult because I had a leg injury. The fights are solid and have a lot of drama in it and I went all out with the character.

Your working experience with Indraganti?

Working with Indragnti garu is like going to school again. You not only learn so much as an actor but you also change as a person. The atmosphere on the set of his films is peaceful and he works in a very cool attitude and that makes things very easy for us. You will get shocked to see his solid work in V.

How was it working with an actor like Nani?

We both are individual actors and accepted the film for its story. We did not calculate as to who will have more scenes or songs in the film. He is trying a negative role for the first time and for me it was something new as well. Nani has done a superb job and will shock you in his role.

Are you disappointed with the OTT release of the film?

Initially yes as our film is the one which should be watched on the big screen. But Amazon is getting a wide release for us as it is releasing in close to 200 countries which are never before release for any of our team members.

I play this cop who is quite efficient in his job and real-life as well. He is stylish, popular in the city for his looks, and the way he leads his life. What happens when such a cop gets challenged by a guy who is on a personal mission.

Many feel that you did not get the fame that you are capable of?

I did not enter the industry to become an overnight star. I loved acting and with each film, I am improving and showing the world what I can do. The rest depends on the directors who choose me. As far as I am concerned, I try to do different roles and want to be called a versatile actor and I am taking one step at a time and it takes time but I will surely achieve my goals.

Who helps you in selecting scripts?

I have some friends and people who help me. But it is my final decision which is ultimate. I am an optimistic person and feel that at the end of the day, it is me who has to perform on screen. So, I make my own decisions even though I fail sometimes.

Your film Baaghi 2 was a solid hit. Why did you not continue in Hindi cinema?

After Baaghi, I got so many offers in Hindi. But during those times, I had other projects in hand here in Telugu. But of films in Telugu, I let go of projects like Brahmastra as well. But in the days to come, I will surely continue doing Hindi films.

I got to spend a lot of time during this lockdown with my family. Every two days, I head a story and finally signed two good films. They will be announced in the days to come.

Finally, What is Mahesh’s reaction to ‘V’?

From day one, Mahesh was super confident about this film. He has immense belief in Indraganti garu and is dying to watch the film. He feels that the film is a big hit.