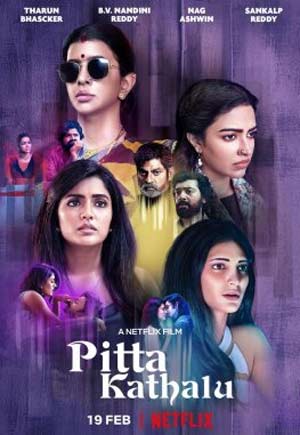 Netflix is ready with its first Telugu original Pitta Kathalu. This anthology film which has four stories is ready for a release on this 19th and is made by directors Tharun Bhascker, Nandini Reddy, Sankalp Reddy, and Nag Ashwin. We met with the team of Pinky that is directed by Sankalp Reddy and spoke to them in detail. Here is the transcript.

You have done two experimental films so far. How did you accept this offer?

When I got this offer from Netflix, I was surprised as to why they chose me for this film which is based on relationships. But after a point, I felt that it was the best time and platform for me to come out of my comfort zone and do something new.

Tell us about your episode Pinky. How did you go about making this short feature film?

The story is about various people in a relationship and has Satyadev, Ashima Narwal, Eesha Rebba, and Srinivasa Avasarala. Each of them is going through their own set of problems and due to a twist, their life becomes worse. We shot the film in just five days. I am eagerly waiting to see how the audience reacts to my work.

So much is being said about your bold role. What made you accept it?

My role is not that bold as many are perceiving it. Though it is a bit new for everyone to see me in such a character, the scenes have been shot quite aesthetically. More than the romance, you will get attracted to the emotions. I play the other woman in a married couple’s life and I had learned a lot by working on this film.

Working with Sankalp Reddy and the whole Netflix release?

I am so happy that I got to work with Sankalp. This is a new experience for him and all of us. But he will shock you with his narration. Also, I okayed this film as the reach through Netflix would be huge and will help my career in a big way.

I was supposed to work with Sankalp earlier but that did not happen. Once I knew about this film, I myself approached him. I play a wife who is going through varied emotions and the manner in which she takes her life in control is my role in the film.

What is the USP of your story Pinky?

This story is told from a female’s point of view and my character shows what a woman goes through when she is cheated in marriage. All the emotions are shown through strong female characters and how they react in some tense situations in life.

What’s your take on the whole rise of OTT and Netflix culture?

As the one who lived in the US for several years, I was associated with Netflix from the time we used to rent their DVDs. From there, we have come a long way and now with the first anthology of films like Pitta Kathalu in Telugu, the whole movie-watching experience is going to change and solid content will be made.

Working with Sankalp and your take on his direction?

I had worked earlier with Sankalp in the film Antariksham. So, I was curious to see how he would narrate the story of relationships. But I was pleasantly surprised to see his grip on emotions, the twist in the story, and the way she showcased the bold content. I feel that his work will surprise many.