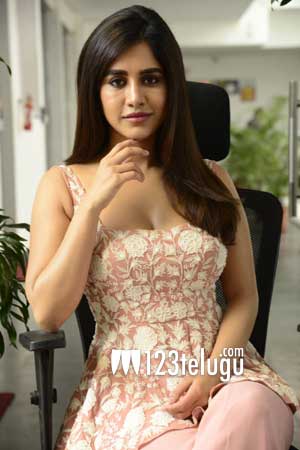 Alludu Adhurs is gearing up for a big release this 14th of Jan and promotions are in full swing. On this occasion, we caught up with heroine Nabha Natesh for a detailed interview. Here is the transcript.

How did you enjoy the success of Solo Bratuke?

2020 was a bad year for many of us. But for me, things were mixed. I had a release in the form of Solo Bratuke and the film did so well. It has hardly been three weeks and there is one more film of mine that is ready for release. I am happy for SBSB and very tensed for Alludu Adhurs that is coming on the 14th.

I play a swimmer in the film and I got a chance to showcase my class and mass avatar at the same time. I don’t know how to swim but I learned it and did my role. The film is a proper commercial masala project which you will enjoy from scene one.

Srinu is one of the most hardworking actors I have ever seen. He is so full of Josh and does not take things lightly. In a way, he is the most inspiring actor and gives his best all the time. He has put his heart and soul into this film and one should appreciate it. I also loved dancing with him and he is dam good.

I did not have many scenes with Anu but I have bonded well with each other quite nicely. I knew her before the film itself and she also has a good role in this film.

Are you happy with your career?

Touchwood, things are pretty good. I am from a theatre background and doing all sorts of roles is very interesting. I am forever grateful to Ismart Shankar which brought me into the proper limelight.

Alludu Adhurs is a big commercial entertainer that has loads of action, fun, and romance. The timing of the film is perfect and one should watch the film in theatres to enjoy what we have made. The production values and massive star cast will impress many.