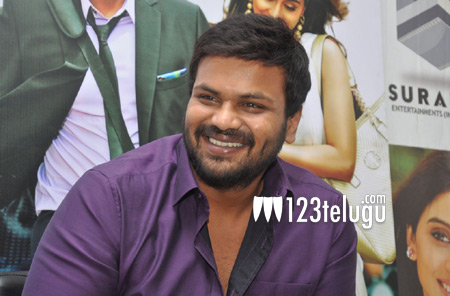 After a long gap, Manchu Manoj is back with a very interesting film Shourya. On the eve of the film’s release, we caught up with the very relaxed and confident actor for an exclusive interview. Let’s see what he has to say.

Q) Are you nervous about the film’s release ?

I am never nervous about my releases and feeling tensed up for anything is not in my nature. I have done my part and am very confident about the film’s outcome.

Q) Was a change of image intentional ?

No ! not at all. Everything happened quickly. Dasardh came to me with this stunning script and I felt that it was the right time to surprise everyone in a different role.

Q) You are known for your comedy and action avatar. Do you think audience will accept you in Shourya ?

Why not ! audience have changed drastically and are ready to accept anything which is shown convincingly. Also, right from the day one, I have made it very clear that the film will not have my usual style of comedy and action.

Q) So how did you approach this subdued character ?

Frankly speaking, my character is like a clone of director Dasaradh. I just had to follow him and did whatever he asked me to.

Q) Tell us about Regina’s role ?

She plays a key character and the entire film revolves around her. Regina is a proved actress and has done a wonderful job in this film as well.

Q) Did your family watch the film ?

Yes ! they have. Every one liked the film big time and my dad especially, appreciated director Dasaradh for showcasing me in such a new way.

Q) Your film is coming along with three other good films. Do you feel competition ?

Not at all. Times have changed now. The audience are accepting what ever is good and are flocking the theaters. Also, both Praveen Satatru and Nandini Reddy are very close to me, so I would want all their films to do well too.

Q) How was it working with Dasaradh for the second time ?

Oh ! it was very easy working with him. Whatever he told me during the narration, he has executed everything to the point. The way he has dealt with certain thrilling elements will surprise you all.

Q) How much does your dad interfere in your career ?

Right from the beginning, I always did things on my own. Selected scripts which suited me and also took lot of risk and only worked with mostly new comers. I don’t want to be in my father’s shadow and will earn a name for myself by my own.

Q) How does your wife react to all the rumours in the film industry ?

Laughs ! I knew her from the past five years and she has got used to all these gossips and rumours now.

Q) Does she guide or help you in your work ?

No ! she does not give me any suggestions and leaves everything on my own.

I will announce it in a week. For this film, I will be seen in a complete makeover and am taking two months off to prepare for the film.

With that, we concluded our exclusive interview and wished Manoj the best of luck for his film.