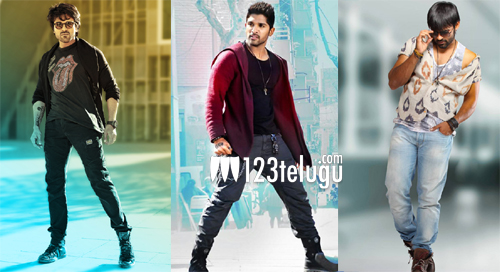 Young Mega heroes Ram Charan, Allu Arjun and Sai Dharam Tej are currently busy shooting for their respective films at Ramoji Film City in Hyderabad. Interestingly, these three actors are shooting for action sequences for their films. Ram Charan is fighting it out with a group of goons in stunt master Venkat’s supervision for his upcoming action entertainer, Bruce Lee.

On the other hand, Bunny is participating in a heavy duty fight sequence in Ram-Lakshman’s supervision under Boyapati Srinu’s direction. Finally, Sai Dharam Tej joins his seniors and he too has been shooting for a chase sequence in Williams master’s supervision for his ongoing film, Thikka, in Suneel Reddy’s direction.

Ram Charan’s Bruce Lee is nearing completion, while both Bunny and Sai’s films are in the early stages of their shooting.