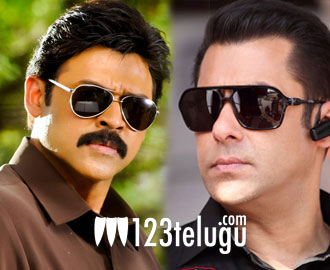 Victory Venkatesh is extremely happy with the success of his Sankranthi offering ‘Bodyguard’. The movie has been doing well and Venkatesh has been receiving a lot of compliments for his performance. But the best compliment seems to have come from none other than Salman Khan. “Salman is a good friend of mine. He has learnt about the movie’s great run here and he is extremely happy. He has congratutaled me personally for doing a good job”, said a visibly happy Venkatesh.

The movie’s platinum disc function will be held in Vizag today. Producer Bellamkonda Suresh has decided to celebrate the event in style as the project is on track for a very profitable outing. Gopichand Malineni has directed this movie and Trisha is the heroine in this film. Saloni has acted in a crucial support role.