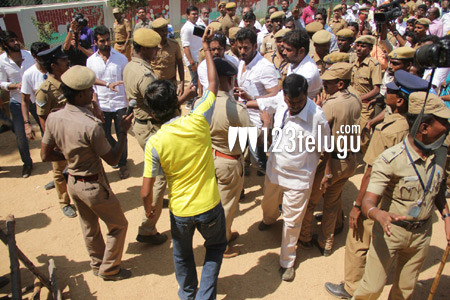 The Nadigar Sangam elections which started off peacefully this morning turned violent after a group of opposition members attacked popular actor Vishal while he was overseeing the polling process. Vishal apparently injured his left hand in the attack and even fell unconscious. Vishal’s team members offered him first aid immediately and the actor returned to his business after some time.

Soon, both the warring groups resorted to mutual allegations and tense situation prevailed for a while, leading to the suspension of the polling temporarily. This incident once again heated up the already strained relationship between both the opposition groups, Sarathkumar’s team and Vishal’s Pandavar Ani. The election results will be out by this evening.