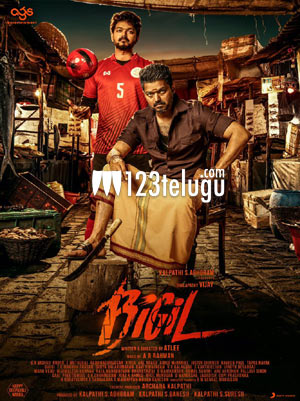 The much-awaited first look poster for star hero Vijay’s upcoming sports drama, Bigil, is out and how! The poster’s impactful design and Vijay’s striking makeover in the roles of a don father and a footballer son wowed Thalapathy fans who have been excitedly waiting for the first look. Another poster will be unveiled tonight at 12 am.

Bigil has Nayanthara as the female lead. In the film, Vijay as Bigil will be seen as a football coach who trains a group of young women footballers. AR Rahman is scoring the soundtrack for this highly-anticipated film. AGS Cinemas is bankrolling the film, which is slated to hit screens for Diwali. Stay tuned for the second poster tonight.